Trotsky in New York, 1917: A Radical on the Eve of Revolution 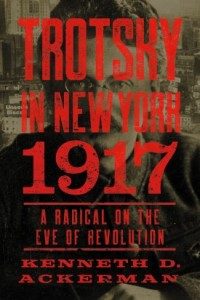 Trotsky in New York, 1917: A Radical on the Eve of Revolution

D.C. lawyer and author Ackerman (Young J. Edgar) takes the obscure story of Leon Trotsky’s 10-week stay in New York City in early 1917 and succeeds in painting a picture of a man on the cusp of greatness…. His brief stay in N.Y.C. may remain a historical footnote, but Ackerman clearly demonstrates the forcefulness of Trotsky’s revolutionary spirit. – Publishers Weekly

Attorney and amateur historian Ackerman (Young J. Edgar: Hoover and the Red Scare, 1919-1920) creates a lively portrait of this tireless agitator … In boisterous prose well-matched to his topic, the author also convincingly evokes the social ferment of New York’s huge immigrant community: polyglot, united in hatred of the czarist government, and receptive to socialism but arguing endlessly and urgently about political theory and strategy. Ackerman succeeds in presenting Trotsky’s little-known weeks in New York as an absorbing adventure, though much greater adventures lay ahead. An entertaining and informative account of a footnote to the life of one of the 20th century’s most charismatic leaders. – Kirkus Reviews

It presents a portrait not only of a towering yet all-too-human political figure on the cusp of history, but also of the city itself at a special moment in our collective memory. – New York Public Library

[Ackerman] is a gifted storyteller. He has unearthed a wealth of previously little known material and produced from it a book that is appealing and thought-provoking. . . .  it deserves a wide audience. The author’s empathy for “old” New York is vivid and deep, as is his fascination with Leon Trotsky. – World Socialist Website

Exhaustively researched, impressively well written, exceptionally accessible in organization and presentation, Trotsky in New York, 1917: Portrait of a Radical on the Eve of Revolution by Kenneth D. Ackerman is a seminal work on the life and times of Leon Trotsky.” —Midwest Book Review

Ackerman explores not only the revolutionary’s life in the city, but the worldwide circumstances that brought him there and where he would head after. What emerges is not only a portrait of a man and the landscape of a city, but how the two influenced each other—and how the results swayed world history. —Jacobin

Lev Davidovich Trotsky burst onto the world stage in November 1917 as co-leader of a Marxist Revolution seizing power in Russia. Trotsky became one of the most recognized personalities of the Twentieth Century, an icon of radical change. Yet just months earlier, this same Lev Trotsky was a nobody, a refugee expelled from Europe, writing obscure pamphlets and speeches, barely noticed outside a small circle of fellow travelers. Where had he come from to topple Russia and change the world? Where else? New York City.

Between January and March 1917, Trotsky found refuge in the United States. America had kept itself out of the European Great War, leaving New York the freest city on earth. During his time there – just twelve weeks – Trotsky immersed himself in the local scene. He settled his family to the Bronx, edited a Russian newspaper in Greenwich Village, and plunged headlong into local socialist/Jewish politics. His clashes with local leaders over US entry into World War I would reshape the American left for the next fifty years. His frantic attempt to return to Russia to lead the revolution, and the attempt by British intelligence to stop him, was the stuff of thrillers.

There have been no books focusing on Leon Trotsky’s sojourn in New York City. The episode occupies barely a chapter or a few paragraphs in most Trotsky biographies. It is a story rarely told, and newer with the fullness and verse of the current title. As we approach the 100th anniversary of the Russian Revolution, the story of Trotsky’s busy stay in New York presents a portrait of culture clash, seduction, and the city itself at a special moment in our collective memory.