I was absolutely taken by reading The Plans. Clean, straightforward, consistent text: everything stands up. And the style does not disturb. It is exact. I think it has everything to be a success, both due to the current political themes and the author’s narrative talent. – Cristovão Tezza, best seller author of The Eternal Son
Five friends who shared grand dreams back in the 1970s get involved in a plan to kill a corrupt senator nowadays. Unexpectedly and dramatically, the execution of the crime unleashes a succession of violent acts and reveals past secrets that plague each of them.
Crimes, illusions and resentments drive Carlos Marcelo’s second novel. Divided in two parts (“The Plan” and “Another Plan”), like sides of an LP, the book is set in the capital of Brazil haunted by Operation Car Wash, alluding to striking facts in recent Brazilian news.
The Plans is about dreams corrupted by the sensation of impunity, a narrative reflecting the discouragement with the country. Marked by scars from the past, the main characters have only two options in face of new and extreme situations: moving on or disappearing. 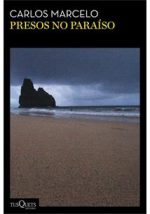