The Man Who Wrote the Bible 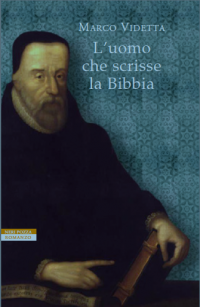 The Man Who Wrote the Bible

The first novel about William Tyndale, the man whose wish to give the English people a Bible accessible to all cost him his life

L’uomo che scrisse la Bibbia is a compelling work of historical fiction that retraces the footsteps of William Tyndale, the first person to translate the Bible into English from the original texts in Greek and Hebrew. His masterpiece is the foundation for all subsequent Bibles in English, and his overall cultural legacy, to this day, is incalculable. Tyndale was a scholar and above all a defender of freedom: he was one of the main promoters of religious reform in sixteenth century England.

This powerful novel, full of twists and turns, tells the story of Tyndale, starting in 1530 with his meeting with Eleuterius, an atheist doctor who treats him for poisoning. The following years saw him engaged in learning Hebrew, under the strict guidance of Rabbi Moses Ben Israel Loewe, in Lübeck. Later, Tyndale had to flee several times, and suffered trials and imprisonment. This is the time of infighting in the court of Henry VIII, the years in which Luther’s ideas were becoming established, and meanwhile the king married Anne Boleyn, bringing about the schism in the Church of England. These clashes had repercussions for Tyndale’s life and work, which revolves around the possibility of translating the word of God and by doing so making it accessible to all. Eventually the scholar, after being caught by deception and imprisoned for many months, was condemned to the stake, despite Thomas Cromwell’s attempt to intervene on his behalf. But his work was not lost.

L’uomo che scrisse la Bibbia is an engaging, fast-paced novel with many characters and evocative settings between London and Antwerp. A seemingly impalpable love for language and the work of translation is expressed through an unforgettable protagonist: a formidable scholar and a brave man, a great innovator crushed by the arrogance of power and his contemporaries’ lack of understanding, Tyndale changed the history of the English language, by showing off all its wonderful possibilities.

Marco Videtta was born in Naples in 1956 and lives in Rome. He has published essays and articles on cinema and literature. He works as a screenwriter, story editor and producer for television fiction and cinema. With Massimo Carlotto he wrote the bestseller Nordest (e/o, 2005), Selezione Bancarella, and the four novels in the Le Vendicatrici series (Ksenia, Eva, Sara and Luz); the series was republished in Einaudi paperbacks in 2014). In 2009 he published Un bell’avvenire with e/o. His novels have been translated into French, English and German.