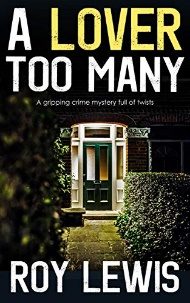 Each Lewis seems to better the last. Here is an intriguing puzzle and likely police work and a fine picture of Northumbrian society and countryside — The Times

A thorough, unpretentious and immensely solid piece of work with an interesting and likeable hero — Times Literary Supplement

Peter Marlin’s wife is found strangled and he becomes the prime suspect. She’d only just returned from an unexplained absence of several months. And during that time, Peter had found a new lover. Everything points to the husband but there’s no real proof.
Inspector John Crow is called in to help the local police. But his new colleagues aren’t keen on an outsider. And Crow must solve the case before anyone else dies.
Set in England in the late 1960s, this is the first book to feature Inspector John Crow.

A young woman is found dead in a college while the students hold a protest. It turns out she was the principal’s secretary and there was more to her than meets the eye.
Who wanted her dead and why? And what does it have to do with the student revolt led by a charismatic firebrand from Iraq?
Inspector John Crow is called in and has little doubt who’s responsible but a series of surprises will make him reconsider everything. Many of the faculty seem to have things to hide.

Nine-year-old Jenny Carson is brutally murdered in Kenton Wood on her way from school.
Then Charles Lendon is found stabbed to death with a skewer through his heart. He was a ruthless lawyer and something of a womaniser. Jenny’s father blamed him for her murder.
As the local police struggle, Inspector Crow is called in. Can he connect the two killings?

Charlie Rutland, a womanising journalist, is found brutally murdered. He worked for a muck-raking gossip magazine and therefore had many enemies.
Detective Crow is assigned to Yorkshire where he must eliminate a long list of suspects.
And where does the German businessman Conrad Gunther fit in? Mysterious lights at Lockyer Tarn, a homeless man hiding out on the Yorkshire Dales, a stolen Volvo and a former Gestapo officer are all seemingly linked in some manner. And then the British spy services get involved . . . Will Crow have his investigation shut down before he can catch the murderer?

A hunt for a missing dog leads to a gruesome discovery down a mineshaft. Not just the injured dog, but a valuable piece of jewellery . . . and the decaying corpse of a woman.
Detective John Crow is called in to run the investigation in this South Wales mining community. He discovers flaws in the dog owner’s account and a visit to the north east of England reveals the dead woman’s identity.
Then there is a surprise confession. But the skeletal Inspector Crow is not convinced, and he pursues the investigation into the dead woman’s complicated life. As he closes in on the killer, complicated questions remain.

Chuck Lindop is found with his head bashed in at the caravan site he manages. He was a charming man, but something of a rogue.
Inspector Crow arrives in the idyllic Cotswolds to find out who killed him. There had been a lot of comings and goings at the caravan park and many of those involved didn’t like Chuck. And was Chuck involved in a recent outbreak of burglaries? There’s also the problem that the area was full of visitors for Stowford fair.
Who wanted Chuck dead and why? It’s a fiendish mystery for Detective Crow to solve in his inimitable way.

A crisp autumn morning, and the hunt is in full cry across the Northumberland countryside. But instead of a fox, they discover the body of their most notorious opponent in a bush.
The chief inspector calls in Inspector Crow of Scotland Yard. He arrives in the wide, sweeping countryside of Northumbria and confronts a young local inspector with an unusual approach to crime. But Crow is hamstrung by his own preconceptions about victims and suspects. Patient police work reveals unexpected sides to the victim and those suspected of his murder.
Then there is another murder and everything seems to fall into place. But Inspector Crow is dubious and he won’t rush to easy conclusions.

Fred Norman is found dead in a pond near the mining works of an American company which he worked for. Detective Crow of Scotland Yard is called in and finds a local force unwilling to cooperate and a divided community.
Environmentalist groups and some local people oppose the mine. A fifteen-year-old-girl was run over in the village in a hit-and-run incident. Suspicion soon falls upon womanising activist Jack Prince but Crow is aware that are many false trails — and too many lies. Things become even more complicated when he learns a shocking secret about the dead girl.