The End of Democracy:The Rise and Fall of a Civilization 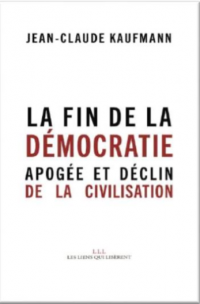 The End of Democracy:The Rise and Fall of a Civilization

Today, there is a growing and explosive contradiction between the state and democracy. The author looks back on and explores the past few centuries to demonstrate how it all began and to explain how this terrible trap was slowly built.

For a few years now, observers and whistle blowers have been pointing to the dark clouds on the horizon. They have been warning us about global warming; about the sickening abuses of a liberal economy based on finance; about the rise of populism, nationalism and narrow-minded communities; about the growing hold of the Big Four tech companies on our personal information. However, these problems seem disconnected from one another. We can’t explain their genesis, especially on a global scale.

In this well-documented and elegantly argued essay, Jean-Claude Kaufmann weaves a link between all these problems, which at first glance seem disparate. He gives an impressive overview of the factors that could destroy our world. His analysis explains why we refuse to face the truth and shows that we live under the illusion of an exuberant democracy, which is nothing but a mere swan song…

Jean-Claude Kaufmann is a well-known French sociologist. A CNRS researcher, specialized in identity and everyday life, he published several books among which The Handbag: A Little World Full of Love (JC Lattès), Sharing One Bed: The Loving War (JC Lattès) or Trapped In Our Couple (LLL).