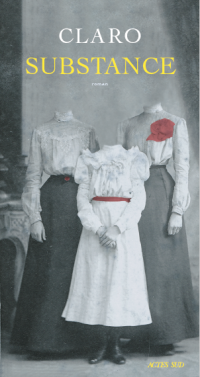 According to Benoit’s aunt, there are three categories of orphan and Benoit belongs to the third: those children who have never known their parents. His aunt takes Benoit in and is determined to get the poor lad back on his feet. At a vigil, Benoit takes advantage of his aunt’s absence and takes a pearl of ectoplasm from the mouth of the deceased and experiences visions that draw him into the world of spiritualism. His aunt realises that he has been blessed with the gift of foretelling when people will die and so she starts buying houses in viager arrangements since she knows how long the owners have left to live.

It is at the house of one his aunt’s potential ‘victims’ that he makes the acquaintance of a certain Marguerite who is a believer in alien abductions. He joins forces with her to confront increasingly dark forces, with events building to an explosive climax and an emotional and existential revelation.

Born in Paris in 1962, Claro has written some twenty books. He is also a translator (including of W. T. Vollmann, W. Gass, W. Gaddis and S. Rushdie) and has a blog called ‘Le clavier cannibale’.