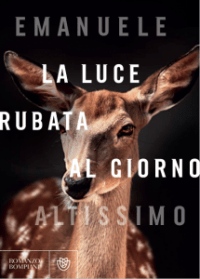 “Such and intense and deeply balanced in style debut novel is what Italian literary narrative has been waiting for years.” — Fulvio Panzeri, AVVENIRE

“Olmo witnesses the emotional derailment of his brother Diego who gradually slides down the slope into dissapearance. It’s a very powerful debut.” — Paola Maraone, ELLE

“Splendidly described landscapes (American novelists have here left their mark) reflect the tragic fight of a young boy grown up too soon to face and overcome a life of losses and grieves. We wish for this debut a well-deserved recognition.” — Rossella Pretto, SATISFICTION

“What keeps big structures from falling is their capacity to bend. This is a good book, because it truly gives the reader strong and sincere emotions: a gift.” — Laura Marzi, IL MANIFESTO

“A coming-of-age novel, a stream of memories: the summer that will change characters’ life forever.” — Monica Virgili, IO DONNA

This is a novel of well calibrated form made of gracefully balanced words, in an attempt to create order in a story of profound family torment that invades nature, creating an amalgam where it is difficult, in the end, to distinguish between feelings and landscape.

Lastly, this novel investigates the possibility of an attempt to stop loving, when the object of our love is as indispensable as it is destructive.

Engineers talk about “permissible stress”: the greatest strain a building can stand before collapsing.  The Empire State Building, for example, survived a B-25 Bomber crash. During the summer that changed his life forever, Olmo really is building a model of the Empire State Building: with infinite patience, aware that the building’s strength lies in each little individual brick. But what is the permissible stress for a family, for the love that keeps people together?

Olmo, his elder brother Diego and their grandfather are in Val d’Aosta, in the chalet their parents bought before they died. The hope is that those wonderful places will bring peace to Diego’s angry and restless spirit, when he finds a job in a summer camp there.  But as soon as the wind rises, the ski-lifts tremble and the dark shadows of clouds loom in the valleys.

Only Olmo realizes that Diego is slipping away into a universe where no-one can reach him, a delirium that seems to grow and touch the heavens.

And he would give anything to save him.

Emanuele Altissimo was born in 1987 in Turin, where he graduated with a thesis on David Foster Wallace and attended a two-year creative writing course at the Scuola Holden.