Seeds On Ice – Svalbard and the Global Seed Vault 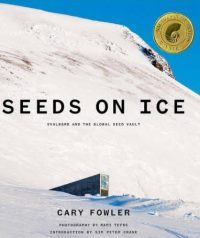 Seeds On Ice – Svalbard and the Global Seed Vault

The DOOMSDAY VAULT and how we save the world.

An extraordinary book – in equal measure fascinating, beautiful, and haunting. – Bill McKibben, author of Eaarth: Making a Life on a Tough New Planet

For those of us struggling to keep the planet from cracking, it’s a great comfort to know all about this project. – Elizabeth Kolbert, author of The Sixth Extinction

Because the Global Seed Vault isn’t open to the public, Fowler’s book is the only view of it most of us will ever get …So as Fowler catalogs the history of agriculture, the long road of crop diversification and, more recently, of how many varieties have already been lost, we get stunning photography to keep us turning the pages. . . . If the pictures of polar bears and collapsing ice shelves aren’t message enough of the timeliness of both the project and the book, Fowler also notes that the Global Seed Vault has already proved its worth. The first seed withdrawal came in 2015, when deposits that had been made from a gene bank in Syria were sent back to help re-establish the banks in the region. —The Los Angeles Times

There’s a simple faith in a seed that these words and images convey that is beautiful. – John Seabrook, The New Yorker, author of The Song Machine

Your introduction to an extraordinary, farsighted venture. – The Washington Post

Seeds on Ice is a marvel of great story with beautiful pictures illustrating the wilderness of the Norwegian mountain hosting the frozen seeds. But, above all, Seeds on Ice is a monument to [Cary Fowler’s] passionate love for traditional farming and seeds. . . . [He is] telling a passionate story that seeds are life, warning us to wake up and defend unmodified seeds and traditional farming, which are the bedrock of life and civilization.  —Huffington Post

A thoughtful treatise on our debt to the world of plants, and our responsibility for their stewardship … with plenty of stunning photography.  —Sierra Magazine

[A] fascinating look at a place few of us would otherwise visit. – Discover Magazine

A glimpse into what has become the world’s most crucial agrarian library. – GOOD Magazine

Here is an adventure story and an amazing success story of one man’s personal, professional, and passionate crusade for the conservation of genetic diversity in the world’s agricultural crops. – Gregory Long, president of the New York Botanical Garden

Seeds on Ice introduces readers to our most precious culinary resource – the Svalbard Global Seed Vault – and our most urgent challenge as eaters: protecting crop diversity for the future of food. – Dan Barber, chef of Blue Hill and author of The Third Plate: The Future of Food

With the world’s sharp focus on climate change and the devastation it may lead to – not to mention the apocalyptic potential of a virus or nuclear war – this is a good time to think about how we sustain, or rebuild, our civilization in the worst case scenario. How will we grow corn or wheat or rice? Back in the 1990’s scientist, conservationist, and biodiversity advocate Cary Fowler wondered the same thing. So he petitioned the UN and created the Svalbard Global Seed Vault – otherwise known as the Doomsday vault.

The vault sits deep in a mountain on a desolate island in Norway above the Arctic Circle, and houses more than half billion seeds from every country in the world. In Nautilus award-winner Seeds On Ice, Fowler tells for the first time the comprehensive inside story of how the “doomsday seed vault” came to be, while breathtaking photographs offer a stunning guided tour not only of the private vault, but of the windswept beauty and majesty of Svalbard.

Cary Fowler served as the Executive Director of the Global Crop Diversity Trust from 2005 to 2012. He was one of the creators of Svalbard Global Seed Vault. Fowler is also author of Shattering: Food, Politics and the Loss of Genetic Diversity and Unnatural Selection: Technology, Politics and Plant Evolution. He is the recipient of several awards: the Right Livelihood Award, the Vavilov Medal, the Heinz Award, the William Brown Award of the Missouri Botanical Garden, the Thomas Jefferson Medal in Citizen Leadership, and three honorary doctorates. He is one of two foreign elected members of the Russian Academy of Agricultural Sciences.