Rhapsody of the Overlooked 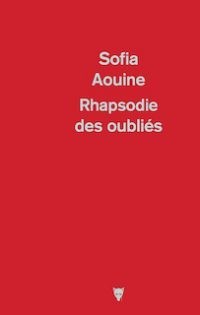 Rhapsody of the Overlooked

Abad can join the rebellious offspring club next to Holden Caulfield of The Catcher in the Rye.— Frédéric Beigbeder, Le Figaro Magazine

With her funny and modern Rhapsody of the Overlooked, Sofia Aouine succeeds in a daring arrival on the literary scene.— ELLE

This is the most beautiful book I’ve read about adolescence, the relationship between boys and girls, and also about immigration. — François Busnel, presenter of La Grande Librairie

The verdict is unanimous: It’s a favorite among the whole team! — Julien, librairie L’esprit Livre

Abad is a contemporary version of Momo in The Life Before Us by Romain Gary […]. And his daily life, his story, is told marvelously well, in the frank and jocular tone of a teenager’s slang full of flavor. —Anne, librairie L’Oiseau Lire

A tender and unsettling novel. And above all wonderfully well-written. Certainly a real gem to closely monitor. —Laura, Cultura Saint-Aunes

La Goutte d’Or as told by an author who has read Zola and has known the vagrancy of poor children at the time when Vanoprix was still facing Tati. A successful debut-novel. — Le Courrier de l’Atlas

A realistic text in a language inherited from the streets, full of both slang and literary terms, inventive and rhythmic. — Muriel Steinmetz, L’Humanité

The story starts in the present day, in Paris’s Goutte-d’Or neighborhood near the Barbès metro station, where North African and African immigrants congregate. Influenced by Zola’s L’Assommoir, which describes daily life in that working-class neighborhood during his era, Sofia Aouine portrays the life of Abad, a mischievous, turbulent 13-year-old boy.

Like Antoine Doinel in Truffaut’ 400 Blows, Abad dreams of a brighter future. But in that urban jungle, where an impoverished, ethnically diverse population does its best to get along, his aspirations soon turn into lost illusions. Yet escape routes from his suffocating life do appear, and one of them is the discovery of desire and sexuality. Even if it means breaking the rules, even if it means doing whatever it takes to get others to let him learn about life his own way.

The word “rhapsody” comes from the Ancient Greek, and literally means “songs stitched together.” Like a rhapsoder, Sofia Aouine stitches words, sewing together the characters’ lives and making the language sing. With this debut novel, a grandiose story-teller is revealed, one with a style so singular and prodigious that it would be pointless to settle for comparing her to Despentes – however powerful she may be.