People of the South 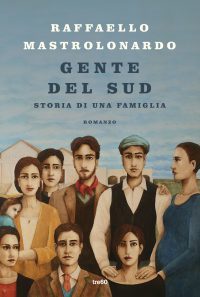 People of the South

Naples, August 1895: cholera has returned to the city. Doctor Romualdo Parlante, frightened by the spread of the disease, obliges his wife Palma, pregnant with their fourth child, to take their other children and return immediately to their native town in Puglia. There, they would find refuge at the house of his parents, Bastiano and Checchina.

And so the spotlight of literature shines on the Parlante family, the protagonists of this novel. Thanks to the resourcefulness of the patriarch Bastiano and his children, the family is emerging from the darkness of history and is trying to find its spot on the small, sun-kissed and impoverished stage that is the South of Italy, in particular the difficult yet rich land of Apulia.

It is the story of the men and women of the family – Aniello, Costanzo, and above all Cipriano, the child Palma was carrying in her womb as they escaped Naples, Vincenzina, Gelica, Reginella… The story of the Parlantes entwines with the tumultuous one of their country, Italy. The first decade of the 1900s, the colonial adventure and the First World War (embraced with vigour by the young males of the family), the years of the first, tough social battles and then the onset of the fascist regime. The dawning of a new era and the perils of modernity. The tragedy of the Second World War and the end of the world as they knew it, followed by reconstruction, the economic boom, and the Italy that we know today. An entire century full of novelty, challenges, and dramas which the Parlantes, despite their differences, always face with courage, determination and ambition.

The result of over ten years’ work, “People of the South” tells the tale of the many forms love can take in the life of an individual: passionate love, capable of overcoming any obstacle and defying any convention. Love for your spouse and children, for your home, for your possessions, for your country, for ideas. It is a global novel, one of those stories you can lose yourself in. It is the story of a family, unique but at the same time like many, within the story of a country, unmistakable yet like all the others.