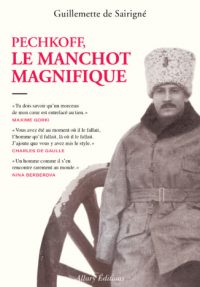 The monumental biography of one of the most staggering, fascinating and emblematic people of the 20th C. – Bernard Pivot, Le JDD

There is some of Gary with this man… Guillemette de Sairigné has given back all of its brilliance to this ‘magnificent penguin’. – LiRE

A long-term narrative, led by the gallop of adventure, like a great-performing novel. – Le Figaro Magazine

Gorky’s adopted son, a hero of the Foreign Legion, a man of influence, a French ambassador, and a Don Juan, Zinovy Peshkov, a.k.a. the “Magnificent One-Armed Man” is a forgotten legend of the 20th century.

Nizhny-Novgorod, at the turn of the last century. A teenaged boy spends his days looking for trouble on the banks of the Volga. He is poor and Jewish – a pariah in Czarist Russia. But he encounters the hugely influential Maxim Gorky, who hires him as his assistant, and goes on to adopt him. And so Yeshua Sverdlov becomes Zinovy Peshkov (Peshkov was Gorky’s true last name).

In exile in Capri with his new father, Zinovy is exposed to literature and politics, and rubs shoulders with Lenin, the writer Bunin, the singer Chaliapin and other great men. But he wants action. When World War I breaks out, he enlists in France’s Foreign Legion alongside Blaise Cendrars, and experiences both the hardship of life in the trenches and the exhilaration of combat – in which he loses his right arm. France, too, adopts him, shipping him out to the USA to convince them to enter the war.

In 1918, as his blood brother Jakov Sverdlov is about to become the first leader of the Soviet nation, Peshkov is in the thick of the Russian Civil War, on the White Army side. During the Rif War, in Morocco in the 1920s, he acquires the nickname “the Magnificent One-Armed Man.” Syria, Lebanon, and his first diplomatic postings are on the horizon. As well as fighting alongside the Free French Forces. He would be De Gaulle’s special envoy, a general and ambassador rolled into one, reserved for the trickiest missions, e.g. in China with Chiang Kai-Shek, and Japan with MacArthur, to whom he became close.

Peshkov traveled everywhere, knew everyone, and seduced everybody. His bravery, joie de vivre, and knowledge of the human soul all contributed to revealing his true nature as a hero whose life was more extraordinary than fiction.

Based on unpublished archives, particularly his magnificent correspondence with Gorky, Guillemette de Sairigné has written the first major biography of Zinovy Peshkov.