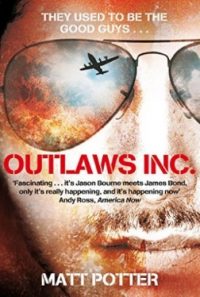 ‘Outlaws Inc is an explosive read, full of heart-thumping excitement and brilliant detective work which shines a light into the darkest corners of the world. This story of flying mercenaries and their secret role in the world we all live in is all the more terrifying for being true’ —Sean Rayment, author of Bomb Hunters and Defense & Security Correspondent of the Sunday Telegraph

‘A riveting homage to these extraordinary ex-Soviet planes and the dodgily heroic Russian and Ukrainian smugglers who fly and crash them’ —John Sweeney, The Literary Review

‘A brilliantly told story. From the Eastern European crews, the action steadily progresses towards the larger players; it will dawn on everyone when they have reached the end of the book that these hardened airmen are mere expendable cogs in a giant machine. The laughs and action along the way make the book’s overall sadness even more poignant. I will certainly buy a copy.’ —Peter Danssaert, UN arms trade inspector & lead researcher, IPIS

‘It’s all very well to know that there is a global trade in illicit goods, and a small contingent of aviators willing to fly anything anywhere, but this is the only one inside story on the post-Soviet flyboys who represent such a key element in this hidden world. In all their boozy, devil-may-care glory, Matt Potter’s unique book doesn’t just offer up a fascinating tale of cratered runways, no-questions-asked drops, midnight flits, shell companies, hidden compartments and duct-taped aircraft of these men, it also tells us something about the modern world, and how for all society’s efforts to make it regulated and respectable, there will always be those who thrive by finding ways to use, abuse and ignore the rules’ —Dr Mark Galeotti, Academic Chair of the SCPS Center for Global Affairs, New York University, and author/editor of Organized Crime in History

‘Outlaws Inc is the ultimate proof that the truth is stranger than fiction’ –Brian Johnson-Thomas, journalist & member of the UN Security Council Panel of Experts

In the world’s most dangerous and war-torn trouble spots, you will find a small band of men risking their lives to fly the planes that bring in desperately needed aid and supplies. But they’re not heroes. These combat-hardened veterans fly giant Soviet-era superplanes which carry a dark secret: 15 tonnes’ worth of secret compartments which they fill with illicit payloads. Their hidden cargo is virtually impossible to detect, and these cowboys of the air will carry anything, from drugs, guns, diamonds and money to people – whatever you’ve got, to anywhere you want them to take it. But they pay a heavy price: crews routinely lose their lives to gun-toting pirates, terrorists, hostile state forces, jealous competitors and alcohol.

Journalist Matt Potter has flown with these men, and in Outlaws Inc. he follows their incredible, action-packed story around the world. On the way he discovers a secret society populated by mercenaries, dictators, secret policemen, gangsters, businessmen and real-life Bond villains, and finds a story that is all the more terrifying for being true

Outlaws Inc. is the result of nearly 20 years of work, and a journey that took its author from the mafia badlands of the disintegrating Soviet Union to the black-market warehouses of Afghanistan, the cocaine coast of Central America and the last bolthole of Slobodan Milosevic’s Serbia. It combines first-person action-adventure with true crime and political analysis.

Espionage, smuggling, and secret ransoms are at the centre of this nonfiction thriller about the outlaws who go where our government won’t. This riveting account reveals the secret corners of our supposedly flat world: black markets where governments are never seen but still spend outrageous amounts of money. Matt Potter tells the story of Yuri and his crew, a gang of Russian military men who, after the collapse of the Soviet union found themselves without work or prospects. So they bought a decommissioned Soviet plane—at liquidation prices, straight from the Russian government—and started a shipping business. it wasn’t long before Yuri, and many pilots like him, found themselves an unlikely (and ethically dubious) hub of global trading. Men like these are paid by the US, the Taliban, and blue-chip multinational companies to bring supplies— some legal, some not—across dangerous borders.

In a feat of daring reportage, Potter gets onto the flight deck with these outlaws and tells the story of their fearless missions. Dodging gunfire, he is taken from place to place by men trafficking everything from illicit weapons to emergency aid, making enemies everywhere but no reliable friends. As the world changes, we see the options for the crew first explode, then slowly diminish, until, in a desperate manoeuvre, they move their operations to the most lawless corners of Africa, where they operate to this day. The story of these outlaws is a microcosm of the world since the end of the cold war: secret contracts, guerrilla foreign policy, and conflicts too thorny to be handled in public. Potter uses the story of these men to articulate an underground history of the globalised world. At once thrilling, provocative, and morally circumspect, this book is a must-read for anyone with an interest in espionage, or in how the world works today.