Our Lives. A Fight for Remembrance 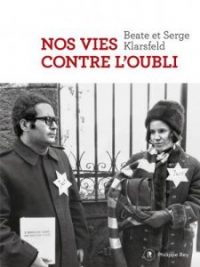 Our Lives. A Fight for Remembrance

Beate and Serge Klarsfeld have devoted their lives to hunting down Nazis, ensuring they stand trial. Since the 1960s, the Klarsfelds’ fight has been for justice and, above all, remembrance.

In these lively conversations, Beate and Serge Klarsfeld share their past and their present. They take turns to tell stories: the time Beate gave Chancellor Kiesinger a grand slap, the famous trial of Lischka, Hagen and Heinrichsohn, their dangerous adventures in Latin America chasing down Klaus Barbie, their methodical pursuit of Papon and Touvier, every step of which endangered their lives but ultimately brought the criminals to justice. These intriguing interviews bring us in to witness singular determination and extraordinary accomplishments, fuelled only by the drive and stubbornness of a man and a woman.

Their distinctive voices intertwine in the pursuit of their shared goal.  «I apply the same work ethic to washing Germany’s dirty laundry as I do to my own family’s!» says Beate. «I’m not just a Nazi-hunter: above all, I am searching for Jewish souls lost in the Holocaust.», Serge’s voice echoes Beate’s.

In an era where indifference is ushering in forgetting, where the most well-established historical truths are contested with impunity while antisemitic acts proliferate, the Klarsfeld’s memories sound with timeless resonance and burning immediacy for the present day. They must be read, heard, and shared.

Serge (born in 1935 in Bucharest from French parents) and Beate (born in Berlin in 1939) Klarsfeld have devoted their lives to the cause of Jews deported from France, fighting for the Holocaust to be recognized, holding the men and nations to account for their part in it. They have also compiled a list of 70,000 names of deported French Jews, a considerable memorial. They have published several books, including their Memoirs (Flammarion, 2015), of which more than 80,000 copies have been sold.