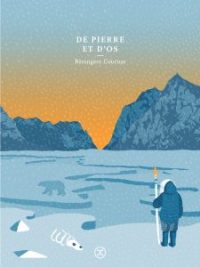 I was immediately transported by the story, the life of a woman in a habitat and culture that the text illuminates and draws the reader into. It is Uqsuralik’s sensations and bodily experiences that make me one with her, but hers are in a cosmos full of meaning, woven around living beings with beauty and respect. The songs intertwine very naturally with the unfolding story, in a text which is at once fiction, poetry and anthropology. — Annie Ernaux

Magnificent. All at once, Of Stone and Bone is a feminist, anthropological and ecological novel. But above it all, it is a remarkably literary text. The portrait of Uqsuralik adds a universal dimension to current struggles. — Marie Cossart, Librairie Les Parages, Paris

In search of a new way of looking at the world, this novel brings us into the Inuit world. With sweetness, spirituality and respect for the environment, Of Stone and Bone takes us on a young eskimo woman’s journey of emancipation.

The Inuit are a people of nomadic hunters that have roamed in the Arctic for a thousand years. Up until very recently, they had nothing to survive with but the animals they hunted, the stones they freed from the frozen ground, and the plants and the berries that grow in the midnight sun. They share their immense territory with a great number of animals, most of whom are migratory, as well as with spirits and the elements. Water in all its forms is their constant backdrop, and the wind blows into their ears, coming out through their throats in raucous breaths. For every occasion, they have songs, sometimes accompanied by the beating of shamanic drums.

One night in this confined world, a crack in the ice separates a young Inuit woman from her family. Uqsuralik finds herself alone in the half-light and polar cold. To survive, she has no choice but to move on and find a refuge. And so, in extreme conditions, she starts on a quest through the Arctic vastitudes which will reveal her interior world.

Bérengère Cournut was born in 1979. After seven years’ extended research into the Inuit people, their history and their lifestyle, she has published her fifth novel, Of Stone and Bone, written with a naturalist’s precision and a literary sensitivity recognized by the press and her readers.