The New Age For Humanity. The challenges of posthumanism explained to a high school student 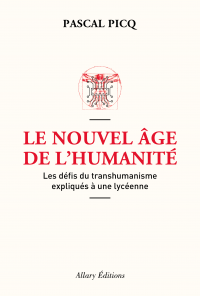 The New Age For Humanity. The challenges of posthumanism explained to a high school student

This book is written to be accessible, understandable, and as unbiased as possible – a starting point for understanding where the post-humanism begins and where it is likely to take humanity. — Le Combat Oculaire

Will new technologies change the course of human evolution? Will humanity survive?

For hundreds of thousands of years all human cultures have questioned the great mysteries of life – birth and death – but the rapid evolution of human societies in the past century is crashing into our thought systems.

Should we take transhumanism seriously, beyond all the irony, utopias and fantasies? We must, and fast. Much more than a technophile trend, transhumanism represents a new era for humanity that envelops all aspects of our evolution. In the form of a conversation with a high school student, Pascal Picq explores how transhumanism is not just a passing fad and is already transitioning us towards a new age in the history of humanity. A third coevolution.

In this lively and accessible text, Pascal Picq, a well-known paleoanthropologist, examines the key questions of human evolution and takes a closer look at this changing era for humanity.

A paleoanthropologist and lecturer at the Collège de France, Pascal Picq is an expert in the evolution of humans, large primates, businesses and societies. His most recent book, Qui va prendre le pouvoir ? Les Grands singes, les hommes politiques ou les robots, was published by Editions Odile Jacob in 2017.