A historical-gastronomical intrigue, yet more contemporary than ever! A new novel that plunges us into the excitement of the end of the Roaring Twenties, the era of wealth, the joy of life, and international jet-setting. September 1929. Adrien Savoisy, son of Quentin, born in 1900, is a culinary researcher for Michelin. He is also a luxury car enthusiast and, driving his brand new Delange 28S, he takes the National 7 highway to Antibes in order to test all the new luxurious hotels there. From the first leg of his trip to Saulieu, Adrien is witness to the death of an obese man at a restaurant, “The Golden Coast.” Then, a suspicious car accident in Nuits-Saints-Georges. In Macon, a cook finds death in the most horrible manner.

He isn’t the only witness. A small, motley group of travelers follow the same path as Adrien. This group includes Curnonsky, a celebrity culinary critic. Adrien leads the investigation between crayfish gratin, Bresse stuffed chicken, and floating islands with pink pralines…
Member of the Slowfood France science council (a movement to save culinary heritage worldwide), Michèle Barriere is part of the Honesta Voluptate association, founded by historian Jean-Louis Fladrin. Culinary journalist, she has authored among others the series History in the Kitchen for Arte and Murder at the Ritz (15,000 copies sold). 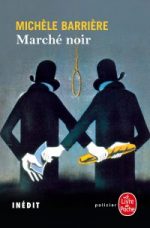