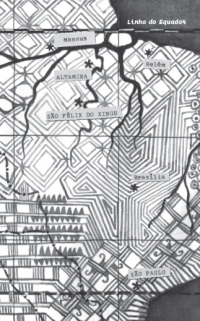 Maria Altamira is a fiction story which sounds more real than reality; it’s a document written by someone with field experience and a sharp and subtle observation power, a timely novel against the dark times we’re going through. — Betty Mindlin (Anthropologist)

Different from major Brazilian contemporary literature production, Maria José Silveira does not avoid discussing the basis of Brazilian culture in her novels. More than this, she investigates the origins of the distortion that prevents the country to become the nation it potentially could be. In this new novel, MARIA ALTAMIRA, the reader is taken from the 70s to nowadays, from Peru to Belo Monte’s Pará, in a journey in search of a time that seems to be lost, with the atavistic Latin American landscape of inequality and social injustice as a background. And this is another remarkable trace of Maria José’s fiction: her writing is a mosaic from the whole continent, with its multiple voices and common dilemmas. MARIA ALTAMIRA is an important mark in the career of a brilliant author in full flight. — Professor João Cezar de Castro Rocha, Universidade do Estado do Rio de Janeiro

Maria Altamira is mostly set up in the Altamira region in Amazonia, state of Pará, during the building of Belo Monte’s Hydroelectric Power Plant. It reveals the sad and difficult reality of the indigenous populations, who live in and take care of the forest, through the journeys of two strong women, a mother and a daughter, whose lives are completely shaken and almost destroyed by natural and man-made catastrophes. It’s simply amazing and _ so sad_ absolutely timely. It’s great literature about the environment, Indians, love and loss, and women who take fate into their hands.

A journey through Latin America and the Backlands of Brazil, this novel starts in 1970, when an avalanche buries a small village in the Peruvian Andes, and ends nowadays in Altamira, Pará, right after the inauguration of infamous Belo Monte’s Hydroelectric Power Plant. Two catastrophes, one caused by nature, the other by humans. The first affects the mother; the second, the daughter. Both of them indigenous people, a Quéchua and a Juruna (Peruvian and Brazilian Indians).

Through the lives of two dramatic, amazingly strong, female protagonists and the characters around them who suffer from the destruction of their ways of living, Maria Altamira deals with some very important and up to date themes: the disrespect towards the environment and the indigenous populations; the search for Father and Mother; the strength of our roots; luck and fate; what is good and evil; love. It’s a two women saga, a truly epic narrative.