The Girl with the Red Olivetti 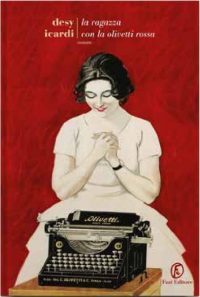 The Girl with the Red Olivetti

Between pages read with the nose and stories written in all the languages of the world,
L’annusatrice di libri recounts a city that today no longer exists. – Giorgia Mecca, «Corriere della Sera»

L’annusatrice di libri is a small jewel of delicacy and witticism, but it is above all a tribute to the power of reading. – Giulia Ciarapica, «Il Foglio»

After L’annusatrice di libri comes the second novel in Icardi’s book series on the five senses, dedicated to the sense of touch. An exciting novel, a sort of treasure hunt full of vintage objects.

Dalia is a vigorous and good-looking (for her age) 70-year-old who has completely lost her memory due to a stroke. Ever since she was a young girl, Dalia has worked as a typist, moving through the twentieth century always accompanied by her portable typewriter, a red Olivetti mp1. At Dalia’s side, the typewriter witnessed the rise of fascism, the post-war period, the economic boom, all the way up to the Nineties: typewriters are now falling into disuse due to the advent of the personal computer, and the now elderly typist suffers a stroke which, although not lethal, blurs part of her memory. However, Dalia’s memories haven’t entirely dissolved: they survive in the tactile memory of her fingertips, from which they are released only when her fingers come into contact with the keys of the red Olivetti. Through the typewriter, Dalia traces her existence: her childhood, her love affairs, her losses and the thousand expedients used to survive, as she pressed on, with dignity and good humour.