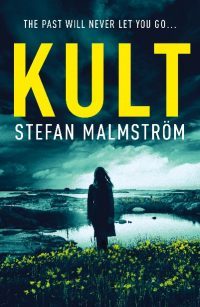 One of those books that you pick up, start reading and then realize it’s 2a.m. and you finished the book. Dark, gripping and full of suspense… fast-paced and breath taking… I highly recommend picking up KULT. It’s chilling and on my list of favourites of 2019 — Jessica Belmont

Brilliant… such a strong and dark story and knowing that some of it is based on actual events makes for a seriously tense read. Fabulous… extremely addictive — Me and My Books

For fans of TV series THE KILLING and THE BRIDGE, of Lars Kepler, Jo Nesbø, Ragnar Jónasson , Samuel Bjork, Will Dean, Camilla Läckberg and Jussi Adler-Olsen.

A dark and gripping crime thriller inspired by shocking and tragic true events in the Church of Scientology.

When a four-year-old girl and her father are found dead in the Swedish city of Karlskrona, the police quickly conclude it was a murder-suicide, a tragedy requiring no further investigation.

But Luke Bergmann, a former bodyguard for the Israeli mafia in New York City, now a reformed criminal still haunted by his violent past, believes they are wrong. The dead man, Viktor, was his best friend, and Luke knows he would never commit such a horrific crime.

Following his hunch, he finds some remarkable evidence that makes him increasingly convinced that Victor and little Agnes have been murdered. Luke begins to unravel his friend’s background and finds out that he had been a Scientologist in his younger years.

Kult is a gripping Scandinavian crime thriller with a difference – it is inspired by horrifying true events in both the author’s life and the history of the Church of Scientology, which are explained in an Author’s Note at the end of the book.

Stefan wrote this book as an act of healing for himself, and also in an effort to stop any other young people from being dragged into this cult in the way he was in his youth. Marketing of the book, therefore, could have two distinct strands, the first the crime/thriller one.

The second strand will use the controversial reputation of the Church of Scientology and the author himself – Stefan is a powerful and articulate speaker who will be available for interviews at any time. This will enable a publisher to publicize the book widely at launch, especially in countries where Scientology is already prominent in the public consciousness and where books such as GOING CLEAR by Lawrence Wright or TROUBLEMAKER by Leah Remini have been successful.

Stefan Malmström is a former news journalist who has worked for Sveriges Radio and Swedish TV4. Today he works as a consultant, lecturer and author. At a young age, Stefan was manipulated into the Church of Scientology in Hässleholm, a small town in southern Sweden. Kult, his first book, is based on his experiences in the cult. Stefan lives in Karlskrona in Sweden with his family.