In Dublin with Jame Joyce 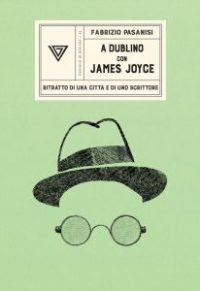 In Dublin with Jame Joyce

“A book full of information and curiosity, a sort of guide for the traveler, and at the same time an instrument of knowledge and consultation for the enthusiast, the student, the scholar”. — Corriere della Sera

“Joyce left Dublin at the age of 22 but the toponymy of his hometown is the true matrix of his literature. Pasanisi’s book reconstructs the puzzle.” — Il Sole 24 ore

The union between these two entities, however, is not so obvious: Joyce lived in Dublin only a third of his life, from birth (February 2, 1882) until his final departure for the continent (October 8, 1904). Even though he was so obsessed from those first twenty-two years to choose the city and its surroundings as almost unique setting of their works. Moreover, if today the writer is revered by his fellow citizens, and has become an ideal guide to move in the Irish capital, he left it by slamming the door. He was never tender with his native land and even treated it badly, first also telling its darker aspects, then dedicating to them a comic masterpiece that reveals their strengths and weaknesses.

To describe this relationship, and capture its many facets, in the first part the book analyzes the years lived by Joyce in the city, and the few occasions on which he returned. He then concentrated on the works, in particular on Gente di Dublin and Ulisse. Joyce was the first to offer a careful and meticulous portrait of the Irish capital and its citizens, initially in a realistic perspective, then increasingly visionary.

The transformation of the pages of the first Joyce up to those of the mature and revolutionary works, is felt, as well as in the style, also in the relationship with the city and in its description: Dublin gradually becomes a symbolic space, with Mediterranean echoes, the place of eternal wandering in the protagonist of Ulysses, Leopold Bloom, the central figure.

Fabrizio Pasanisi, writer and journalist, was born in Naples and lives in Rome. He wrote Bert e il Mago (Nutrimenti, 2013), winner of the Bagutta Prize 2014 as a debut novel. In 2014 has published L’isola che scompare (Nutrimenti). He has translated and edited the works of R.L. Stevenson Il riflusso della marea (Sellerio, 1994) and Gli allegri compari (Nutrimenti, 2016), and Il salvataggio di J. Conrad (Nutrimenti, 2014).