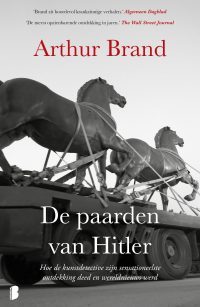 Reads like a novel by John Le Carré. – Nieuwsuur

The most astonishing find in years. – The Wall Street Journal

Forget the film The Monuments Men, in which George Clooney saves art from the hands of the Nazi’s. The way in which two massive bronze horses from Hitler’s personal art collection were retrieved – featuring Russian generals and Nazi descendants – is better than the movies. – Het Nieuwsblad

Mr. Brand used the Moss character to lure the Belgian middleman to meetings, where he wore a camera disguised as a button to record what he hoped was the location of the horses and their owner.– The New York Times

Until recently, experts believed most Nazi-sponsored art had been destroyed in World War II. But that changed in January 2014, when Dutchman Arthur Brand received photos depicting two bronze horse statues that once stood outside Hitler’s chancellery. – USA Today

Dutch art detective Arthur Brand helped recover the pieces — including two bronze horses that used to stand outside the Reich Chancellery and which were thought to have been destroyed in the war. – NPR

But there is no Moss. He’s the invention of Dutch art detective Arthur Brand, who created the persona as a way to respond to objects the art dealer was offering for sale, including Thorak’s horses and other objects revered by the Nazis. – Der Spiegel

How an art detective made his biggest and most sensational discovery – and became a worldwide news item!

During a visit to his former teacher, art detective Arthur Brand comes across a photograph of Hitler’s horses, two-meter high statues that Hitler once ordered to put in front of the Grand Chancellery. It appears they are being sold on the black market. Brand is puzzled: weren’t those statues destroyed in the Battle of Berlin? The ones on sale must be fakes.

Surprisingly enough, however, they are not. Like a true detective, Brand starts his investigation to find out where the statues have been for the last 70 years, who owned them and who is trying to sell them on the black market for a massive amount of money. During his search, he meets leaders of criminal organisations, ex-Nazi’s, former members of the Committee for State Security, shady figures and former East-Germany police officers. They all turn out to have played a part in this mystery. After many twists and turns, Brand manages to confiscate the statues with the help of the German police. His victory becomes a worldwide news item.

We read news stories about stolen art, but know nothing of the bewildering criminal networks behind these thefts. Arthur Brand, known for the Omroep Max miniseries about his work as an art detective, knows this shady, surprising and dangerous world like no other, and his engaging storytelling makes it come alive. Hitler’s Horses is an action-packed true crime story featuring secret services, former Nazi’s, neo-Nazi’s and huge amounts of money.