First They Erased Our Name. A Rohingya Speaks Up

First They Erased Our Name. A Rohingya Speaks Up

“This is my chance to speak for my people, who continue to suffer, but who are voiceless.” — The Guardian

“More than 688,000 Rohingya fled western Burma since August 2017, at the launch of punitive operations, a sweep of violence without precedent. Habiburahman, though, left the zone well before this happened—18 years ago. He passed through Thailand and Malaysia, was stopped by a fishing boat, then tried to reach Australia by sea, getting as far as the Christmas Islands. After two and a half years in Australian detention centers, he was released at the end of 2012.” — Le Monde

“Habiburahman without doubt presents an unambiguous view of the Burmese situation…. But there is little evidence from the Rangoon government to seriously deny it.” — L’Express

Habiburahman was born and raised in a small village somewhere between Rakhine State and Chin State in western Burma. He is a Rohingya, a member of this ethnic group that has suffered exclusion from the eight so-called ‘national’ ethnic races by the Burmese authorities since 1982. The military leader, Ne Win, effectively stripped them of their Burmese citizenship. To leave them stateless in their own country.

In this book, Habiburahman describes the violence he endured since childhood. The insults (‘vermin’, ‘parasite’), the ghettoization, the arrests and the summary executions. But his determination never wavered. Encouraged by his father, he continued his studies, the only way to escape the inhumanity that stems from ignorance.

In 2001, Habiburahman managed to leave Burma. Some of his family are still there. Now, granted political asylum in Australia, he is fighting to speak out against the ethnic cleansing the Rohingya people have endured for decades.

Habiburahman, born in 1979, Rohingya, lives and works as an interpreter and social worker in Melbourne (Australia). He founded the Australian Burmese Rohingya Organization to advocate for his community.

Sophie Ansel is a journalist, author and director. She lived in Asia for several years. It was during a five-month stay in Burma that she met Habiburahman and decided to help tell his story. 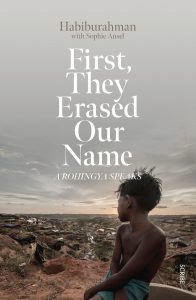