Coffee with Voltaire: Conversations with the Greatest Minds of His Time

Coffee with Voltaire: Conversations with the Greatest Minds of His Time

A great, original mini-biography in short chapters. Very easy to read, let’s sunbathe smart this summer and enjoy a Mojito with Bériot. – Baz’Art

Louis Bériot revives with passion and talent the conversations of this giant of the Age of Enlightenment. – France Info

What is exciting about Bériot’s book is that Voltaire’s personality shines through all these dialogues. – Europe 1 (Au coeur de l’histoire, Franck Ferrand)

An exquisite walk in the company of the most witty, the most insolent, the biggest courtier, the most angry, the most facetious, the most vain, the most enamored of the writers of the Enlightenment: Voltaire. – Historia

Voltaire is more up-to-date than ever. His life was as exciting as his ideas were visionary. Instead of a traditional biography, Louis Bériot presents Voltaire’s fascinating, idea- and action-filled life through a few decisive encounters staged with stunning realism.

Neither a history book, nor a philosophical essay nor a novel, this is an imaginary stroll through the Enlightenment accompanied by a guide named Voltaire. Through picturesque, facetious and profound rendezvous, the talented, extravagant poet, playwright, philosopher and polemicist will introduce us to key 18th-century figures: Newton, Montesquieu, Madame de Pompadour, Frederick the Great, Jean-Jacques Rousseau, Buffon and Diderot.
Their often real, sometimes imagined encounters are based extensively on their own words, drawn from their books and letters. The subjects they discuss include power, religion, superstition, fanaticism ad intolerance. We revisit the eternal questions about life, death, love and morality. This book is like a stroll through a past that has never seemed so present. 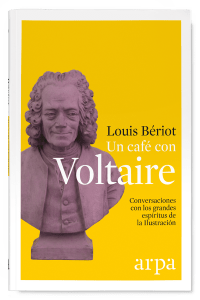