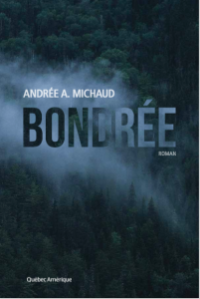 As in her previous novels, Andrée A. Michaud moves outside the framework of the unsolved crime (immaculately constructed though it is) and explores the wider repercussions of the drama. […] With this her 10th novel, her style achieves its most accomplished expression. — Martine Desjardins, L’Actualité

This is a moving rites of passage novel, a persuasive portrait of an era, an effective exploration of psychology and a well-structured detective novel. Switching seamlessly between French and English, Bondrée is characterised by a limpid and poetic language, where attention to detail is matched by an unerring choice of ‘le mot juste’. A triumph. — Josée Lapointe, La Presse

The writing is fiery and inspired. The pace is breathless yet punctuated with familiar scenes of daily life that could be our own. — Le Devoir

The novel flirts with the thriller genre while toying with its rules. — Stanley Péan, Les Libraires

Brilliantly innovative in narrative and thrillingly readable, Boundary is a splendid novel that makes high literature out of crime and suspense. — Robert Olen Butler, Pulitzer Prize winning author of A Good Scent from a Strange Mountain

While it has an element of the whodunit, this lushly written, award-winning francophone novel is literary crime-writing in which the texture of period and place takes priority. — John Dugdale, Sunday Times

…a haunting novel, rich with the details of the families’ daily lives and brilliant internal monologue…[Michaud] deserves to be better known as one of the best writers in North America. —World Literature Today

One of 2017’s finest reads yet … there’s no simplicity in the questions of existence at hand, but in Michaud’s Boundary, readers will find freedom: a skilled, award-winning author stretching folklore without leaping from truth and within crafting a true thriller, lyrical and satisfying, taut and beautifully told.—National Post

The book features two murders and a pair of sleuth figures (hence the Arthur Ellis), but it often seems less a whodunit and more a literary meditation on the impact of the killings on the small community, Boundary, where they took place (hence, the GG Award). —Toronto Star

A dense and beautiful novel about the human condition… While most crime novels put the murder center stage, this one instead uses the crime to deeply examine the complexity of what it means to be alive… Spellbinding. — Kirkus Reviews, STARRED REVIEW

Atmospheric and haunting, this novel about the lingering effects of violence is impossible to turn away from.— Foreword Reviews

The style is dense, lyrical, sometimes hallucinatory, often beautiful … It is a difficult book to put down, but less because we are anxious for a plot resolution than because we are held in a sort of spell woven out of a particular historical moment and a timeless tension between a state of innocence and its inevitable loss. — Reviewing the Evidence

Haunting in its simplicity… Like the wood in the novel, it swallows you up.
— The Book Trail

A truly atmospheric and captivating novel… One which slowly and quietly seeps into your consciousness. A book which will, on some level, haunt me for some time to come.
— Jen Meds Book Reviews

A spectacular book… Exhilarating. I feel reel enriched and rewarded as a reader from the experience. — Reflections of a Reader

The literary thriller exists and Andrée A. Michaud is the proof. The writing is inspired, the pace is breathless.

A chilling thriller as compulsive as Emma Cline’s The Girls.

From the author of Mirror Lake, which was adapted for the cinema by Érik Canuel (Lac Mystère), this book is a literary crime novel: some sixty short chapters written in impeccable, engaging and exciting prose.

Summer of ‘67. The sun is shining on Boundary Pond, a lake on the border nicknamed Bondrée by Pierre Landry, a Canadian trapper whose place in the distant collective memory will soon pass into legend. Everyone is feeling happy and carefree. Zaza Mulligan and Sissy Morgan are playing with a hula hoop on the warm sand, the children are running around on the beach, and the radio is belting out the hits of the moment to the smell of barbecues. One could almost believe happiness is for real, but then Landry’s traps emerge from the earth, Zaza disappears, and clouds gather in the sky.