Before the After. Trips to Cuba with George Orwell 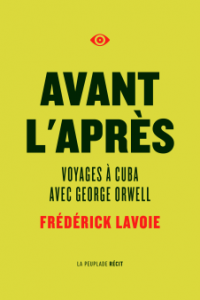 Before the After. Trips to Cuba with George Orwell

Deeply personal writing, original ideas, issues in civilization. Frédérick Lavoie’s work of non-fiction readily handles the tension between these three aspects to delve into the mechanisms of Cuban totalitarianism. Using the new Cuban edition of George Orwell’s 1984 as a pretext and connecting theme, Lavoie deftly shows how the work is still significant and relevant by exploring the everyday life of a population living in a time of censorship. — GGLA Jury

This is a mix of auto-bio-fiction and successful literary research that reads like a mystery novel. Lavoie found a marvellous angle  a new Cuban edition of Orwell’s 1984  to test the limits of the freedom of speech under Fidel Castro’s regime a little while before he passed away. Still, the central question is if literature is still dangerous in Cuba? Or is it still dangerous at all?  — Chantal Guy, La Presse +

More than a well-constructed and researched investigation, Frédérick Lavoie definitely flirts with literature. Orwell’s writing and how it spreads through Cuba end up soaking through the substance, the form and the meaning of the book. — Sarah R. Champagne, Le Devoir

A mix of auto-bio-fiction and successful literary research that reads like a mystery novel. In Avant l’après, Orwell’s writing spreads through Cuba’s day to day and end up soaking through the substance, the form and the meaning of a marvellous book.

Far from those tourists already missing a world about to disappear, Fréderick Lavoie, journalist, decided to encapsulate a world, which, two years after Castro’s death, doesn’t exist anymore. The goal is to see Cuba before it changed: Cuba before the after.

Cuba is the mirror of our unipolar world, the remaining corner of a Cold War burned out prematurely; it’s an abnormality History can’t forget. On this Caribbean island, the present seems to lean towards the future. Between the restored diplomatic relations with the US and the anticipated end of the Castro dynasty, the country is “transitioning”.

In February 2016, a state publishing company launches a new translation of George Orwell’s 1984. Eager to figure out who authorized this publication, Frédérick Lavoie decides to investigate. Within a year he travels to Cuba three times. He is not interested in predicting the future of the island. Rather he encapsulates the
present to use it in the future. Orwell becomes the perfect journey companion to guide the writer through the government’s intricacies.

In this very enlightening story, Lavoie bears witness to this wavering between two eras, roaming the territory and collecting precious and discrete testimonies from the locals.

Frédérick Lavoie (1983) is an independent journalist. He is a regular contributor to La Presse, Radio-Canada and various European networks. In the past years he has lived in Russia, Ukraine and India. He has formerly published Allers simples: Aventures journalistiques en post-Soviétie and Ukraine à fragmentation (La Peuplade).