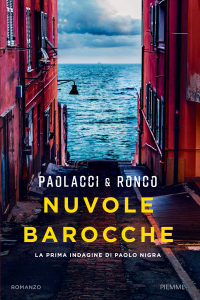 Set in the beautiful city of Genoa, among its tiny alleys and between the blue of the sky and that of the sea, this is the first investigation of Paolo Nigra. The second book of the series will be out in Spring 2020.

It is a mystery with well-depicted twists and perfect Italian atmosphere, amiable characters who move in the nowadays Italian “scenery” with all its old traditions and new contradictions. With a special eye for the “social” problems, the reader immediately empathizes with the main character and all the others acting around him in this classic mystery. Once you start it you cannot put it down.

You know, a good investigator must suspect anyone. But I think it should be said also differently. To do my job well it is necessary to suspend the judgment. I try not to suspect anything at all. Suspicion is a bad ally of those seeking the truth.

It’s Saturday morning and Genoa is awakening from a cold stormy night. The rain has stopped falling and the Eastern wind begins to thin out the clouds, letting the colors of the dawn glimpse. But it is not the sky that attracts the attention of a man in a jogging suit, rather a pile of rags lying on the promenade a few   meters away from him.

Half an hour later, the crime scene at the Old Port is invaded by policemen and CSI agents. The boy is lying on the ground, his face swollen, wearing a shocking pink coat with which, the night before, he had not gone unnoticed at the party held to support civil unions. The victim is Andrea Pittaluga, a university student from one of the “wealthy Genoese families” and nephew of a famous architect.

When he arrives at the crime scene on his Guzzi, deputy assistant chief Paolo Nigra has already said goodbye to his day of rest and put on the proverbial poker face inscrutable even to his closest collaborators.

Forty years, gay, noticing the ferocious fury on the victim, Nigra forces himself not to think of a homophobic aggression. In recent times there have been worrying episodes from this point of view. The first suspects, however, have an alibi and police is struggling in an attempt to find other tracks. Nigra is empty-handed, a condition that does not give him peace. Rocco, his lover, knows this well, and he suffers the bad mood, feeling once again the choice to keep their relationship hidden. The risk that, this time, justice must remain without a culprit is real. Unless we suspend judgment and accept the fact that dominating the destiny of men is nothing but chaos.

Antonio Paolacci (Maratea, 1974) and Paola Ronco (Turin, 1976) live in Genoa and are companions in life. They have both published several books. This first episode of the series dedicated to the investigations of Deputy Assistant Paolo Nigra is their first book written together.