Alfonsina and the Road 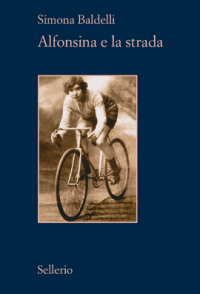 Alfonsina and the Road

“With this novel, Simona Baldelli has stolen from the oblivion a story that is a fable and epic all together: the life of Alfonsina Strada, the first woman who participated to the Tour of Italy, challenging the prejudices of the world and her own limits” — Antonio Sellerio

“What a great portrait of a strong woman living her dream! The story about Alfonsina Strada Morini, the only woman who ever drove the Giro d’Italia, is thrilling and sensitive. You get very close to this courageous woman who, at the beginning of the 20th century, fought for recognition as a sportswoman in the world of cycling and never let herself be beaten down. An intense and powerful story that will enrich the program of Eichborn Verlag Germany with its inspiring message.” — Iris Gehrmann, acq. editor at Eichborn Verlag

Alfonsa Rosa Maria “Alfonsina” Morini married Strada has been a road bicycle cyclist, first woman to compete in male races like the Tour de Lombardia, and Tour of Italy; known as “the queen of crankset” was considered one of the pioneers of parity between the male and female sports.

In combination with her literary skills, Simona Baldelli recreats the real story of Alfonsina, revealing a romance life, never recounted yet. Alfosina and the Road is the novel of a continuing, constant battle of a woman in order to obtain dignity and a place in the world. And the right to go beyond her own limits.

When they reached the final goal, she had overcome him with a length more than the size of an entire bike. She cut the rope with her hands in the air, laughing and crying, free like she had never been. The handlebar, with no control, wobbled, bended from one side and sent the bike to the ditch. Alfonsina fell face- first, but she didn’t care as she had never known a joy so big. The race organizers, little boys andalso the giant asked “Are you hurt?”. She jumped up, full of vigour. “Not really, it was fun!”. The cap, in the tumble, fell down and remained in the ditch. She picked up and tossed it against her leg for removing the mud. She shook the head and her hair fell down to the neck. Organizers, little boys and the giant jumped back and said “But she is a girl”.

Alfonsina and the Road, tells the life story of the corridor, from the hard and starving times of Fossamarcia (next to Bologna) where she was born on the 1st March of 1901 and lived until the age of 14 years old, to the 13th of September of 1959, day when she died while the probe Lunik 2 touched for the first time the lunar soil and the humanity crossed its limit towards the sky. In between there were two world wars; a March to  Rome where one of Alfonsina’s brothers took part, D’Annunzio that gave her a golden star; and an award that Mussolini wished to deliver but she didn’t go to collect it. Also, there were a medal that Zarina Alessandra wanted to pin personally on her chest and the birth of the Southern Question. The kidnapping and the murder of Giaocomo Matteotti occurred during the Tour of Italy in 1924. The years passed performing in European circus. Two weddings. The first one when Alfonsina was 14 years old and found a way to run away from home, because there she was obliged not to ride her bicycle. The young husband Luigi Strada, working as mechanic, was a kind man with a fragile psyche. He died after long and painful years closed in a mental institution. He sincerely loved her and she loved him back. She maintained his surname even after the second marriage with her colleague Carlo Messori.

In addition, to the story of Alfonsina, there is also one about a continent, Europe, being developed between wars and starvation, and the long journey of women on the road. The ones we can now define as equal opportunities recounted also through citations from newspapers’ articles and documents of the time. Alfonsina and the Road is the novel of a continuing, constant battle of a woman in order to obtain dignity and a place in the world. And the right to go beyond her own limits.