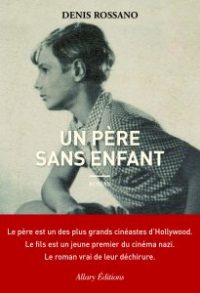 Denis Rossano’s book is an exceptional document, as enlightening as it is moving. — Les Echos

Denis Rossano has mixed investigation, film analysis, the life of Sirk and romantic scenes. The issues are extremely well dealt with, and the subject is thoroughly known. — Le Point

This book is of striking beauty. Denis Rossano leaves his obscure lights, his diffusive nostalgia, his childlike tenderness for cinema, in an incandescent literature. Tragically beautiful. — L’Express

A Childless Father allies the force of a documentary to the intensity of a tragedy. — Le Figaro Littéraire

The father was one of Hollywood’s greatest filmmakers. The son was a child star in the Nazi film industry. A novel about the true story of their wrenching separation.

The father, Douglas Sirk, was theatre director in Germany the 20s and one of Goebbels’s favorite filmmakers in the 30s. Married to a Jewish woman, he had to flee to the United States, where his melodramas allowed him to conquer Hollywood.

The child was Klaus Detlef Sierck, Douglas’s son by his first wife, an unsuccessful actress who became a fervent Nazi. After their 1928 divorce, she wouldn’t allow him to see their four-year old son, who she turned into a child star during the Third Reich.

The father would never see his son again, except on screen.

Toward the end of his life, in the 1980s, Douglas Sirk gave a long interview to Denis Rossano, a young film student. The director talked about Berlin, Nazi propaganda, his second marriage, exile, the post-war Hollywood major, and more… but said hardly a word about Klaus. Yet Sirk’s entire life and body of work were a desperate search for his beloved son.

To put into words the story that Douglas Sirk never told, Denis Rossano investigated, discovering what even the filmmaker himself never knew.

Un père sans enfant is a true novel, worthy of the greatest melodramas.