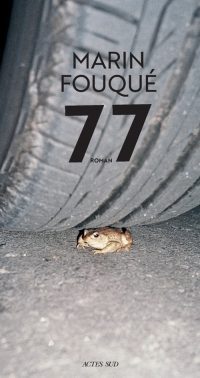 Marin Fouqué succeeds at creating a stunning stream of consciousness full of spontaneity, energy and truth. — Livres Hebdo
A sombre tale with forceful writing. Impossible to forget this book. — Version Femina
It’s precisely his style which is striking, from the first few pages of this masterful 77, proposing a perfect balance between an impeccably rhythmed wording and an orality which is full of life – of melancholy also. — Baptiste Liger, Technikart
Employed here is a brute language, oral and vivid, between raging urgency and melancholy, which forms the memory of a young boy. The author recounts with justice the sad life of the young inhabitants of 77 – La Seine et Marne – beneath the shadow of the city, desirable and fearful. — Mathieu Champalaune, Transfuge
Stupendous, political, modern […] The finger on the pulse of our time, 77 is an electric novel. Its sparks are sudden, its style nuclear, its rhythm, distraught. […] With a bang, a writer is born. — Gérard Lefort, Les Inrocks
These words are raging, sonorous, grinding. And the tale of its protganist, an endless pursuit, exhausting, colourful. Almost stroboscopic. — Nedjma Van Egmond, Marianne
The brute and frenetic writing of Marin Fouqué paints his story: one of a boy who is prisoner to an ‘ugly’ body, a broken home and a place which assails him with its violence. […]  This debut novel, […] reminds us as much of Edouard Louis as of Virginie Despentes. — Antonella Francini, Le Monde des Livres

His first novel, 77, rings […] like an incantation, impressively full of spontaneity and vitality. […] As well as interrogating the obsessions of our time, Marin Fouqué marks our minds with the language he employs. […] 77 is a violent book, which disrupts and bewitches, a veritable sensory experience. We close it trembling with excitement, as though, whilst reading it, Marin Fouqué had recited his text into the crevice of our ear. — Léonard Desbrières, Lire
This novel written in sensitive and bright language, with beautiful feminine characters, is a little too loaded in the last pages but, similar to K.O by Hector Mathis (Buchet-Chastel, 2018) and L’été des Charognes by Simon Johannin (Allia, 2017), we have here a true voice. — Sophie Divry, La revue Etudes
77 is diabolically efficient, leaving nothing to be ignored about the pronounced taste of its author for rap and poetic prose, and proposes a language with particularly refreshing considerations. — Le Vif L’Express
Marin Fouqué, author already registered in the landscape of sound poetry, creates here a new voice, which absorbs the masculinity and question of the genre, that of violence and existence, in a brutal and forward manner. Yet it adds, with a softness and subtly, possibilities for escape… — Marie Fouquet, Le Nouveau Magazine Littéraire
In the manner of Edouard Louis and David Lopez, the author of Fief, Marin Fouqué, 28 years old, avenges the frustration of his protagonist and of all such victims, with a litany of energy. — Elisabeth Philippe, L’Obs

Since the beginning of term, the routine is always the same.

He arrives at the bus stop early in the morning and finds there the Traitor, November Girl, Big Kevin and the fraternal twins. Everyone gets on the bus except him and Big Kevin. Since the start of term, Big Kevin has decided to make a man of him through a mixture of grand pronouncements, firm clouts and the odd joint.

But on this particular day the young narrator ends up spending the entire day alone on the bench of the bus shelter commenting on the comings and goings of the neighbours. He plunges into memories of what it was like before the summer when the Traitor’s name was still Enzo and they, together with November Girl, formed an inseparable trio.

Bearing implacable witness to the disarray of a generation whose dreams have been stolen, this debut novel immerses the reader in a spontaneous flow of consciousness.

Born in 1991, Marin Fouqué is a graduate of the Cergy fine arts school. He composes poetry, rap, short stories and stage performances that blend prose, song and music. 7 7 is his first novel.